Judy Blume (the prolific, best-selling author of adult and young adult books including Are You There God? It’s Me Margaret that I remember reading when I was a kid) just released her first book in 17 years which is set in Elizabeth, New Jersey in the 1950s. The backdrop for her new adult tale is a most unusual, real-life series of plane crashes that happened when she was growing up there that I’d never heard of.

Of course when I saw what In the Unlikely Event was about, I had to dig further–and there really were three deadly commercial airline crashes in this one town that occurred in less than 60 days!  Unbelievable, but true!

1. Dec. 16, 1951: a Miami Airlines flight from Newark to Tampa crashed into a brick storage building, caught on fire and skidded into a river. All 56 people on board were killed and one person on the ground was hurt.

2. Jan. 22, 1952: American Airlines landing at Newark in a storm crashed into a row of homes in Elizabeth, killing all 23 on board (including former Secretary of War Robert Patterson) and seven people on the ground. The plane skimmed over the roof of an all-girl’s high school that had let out only an hour earlier and crashed a a block from a Catholic High School.

3. Feb. 11, 1952: National Airlines flight headed for Miami crashed into a four-story apartment building just after take-off when both engines failed. Twenty-nine of the 63 on board were killed, as were four people on the ground. Boys from a nearby orphanage pulled survivors out of the burning remains.

The mayor of Elizabeth called nearby Newark Airport an “umbrella of death” and many residents understandably called for it to be closed.  The airport actually didn’t reopen until November when the airport opened a new runway that directed AWAY from Elizabeth. (good idea!)

And by the way, it’s no surprise, but Blume’s book is also hitting many of the summer recommended read lists. Way to go!

Maybe it’s just me, but it seems like there have been a number of people who should know better in the news lately for causing stinks on airplanes that sometimes even gets them tossed off.

In my experience, airline crews are generally polite (if not overly friendly) but also rushed and occasionally harried trying to help the hundreds of passengers who impatiently want something to drink NOW, to eat NOW, or a blanket to wrap up in NOW. News flash:  when you’re on a plane, it’s not all about you.  It’s about making sure EVERYONE on the plane is as comfortable and safe as they can be wedged into seats like sardines.

When one passenger starts making a scene, it upsets everyone on board.  It makes us feel even more vulnerable at the thought of staying afloat in the air while riding in a metal box with wings that don’t flap. It really wouldn’t kill you to be more considerate of your seatmates and others on the plane.

A few recent misadventures that I’ve heard about (and would make me very uncomfortable if I were on that plane) are:

1.  Jennifer Bassey, a 72-year-old actress of All My Children fame, was kicked off a Delta flight at JFK after telling the attendant to “go fuck herself” when she was told to put her laptop away just like the rest of us peasants have to do at certain times of a flight.  (Come on grandma!) We all put our pants on one leg at a time.  You’re no more special than the rest of us.

2.  NBA superstar John Wall and his gaggle of friends were booted off an American Airlines flight in Las Vegas after one of them got into an argument with another passenger and threatened him.  The passenger didn’t press charges, but the pilot felt safer after they were all escorted off.

3.  You have to watch this video!  This woman was late for her flight and started kicking and trying to yank open the door of the plane as it was getting ready to leave the gate.  She actually screamed, “It was supposed to wait for me.”  She definitely gets the “All About Me” award this month.

4. British TV star strips naked and pees on Dolph Lundgren (does he have death wish?) before passing out. Blames the whole thing on too much Xanax and alcohol.  Really? 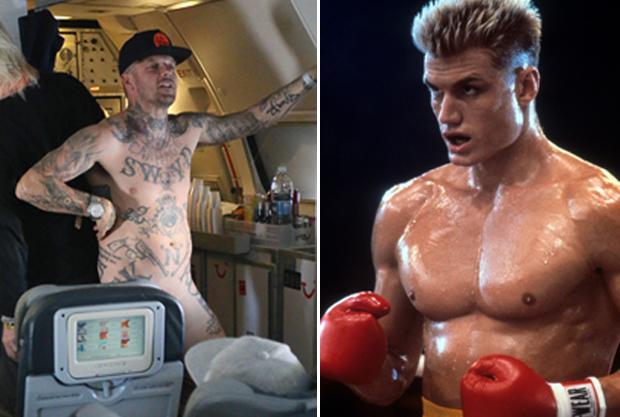 5.  Very religious men of a certain demonization(s) are not allowed to sit next to women of any age on a plane (or anywhere else for that matter) and have created a ruckus when they get to their seat and found that they are sitting next to one.  I have a couple of questions: didn’t you know that you had religion-based restrictions BEFORE you booked the flight? Do you really expect everyone else to move their seats to accommodate you? Did you not realize that 50 percent of the human population is female so the chances of this happening were pretty good? If it’s that important, buy a second seat next to you and leave it empty.

6. Pregnant musician Sarah Blackwood was removed from a United flight.  She says she was kicked off because her 2-year-old son was crying.  Other reports say he was not strapped into a seat (and Blackwood also said he was in her lap so she could calm him down) and was walking around the aisle as the plane was taxing and preparing to takeoff.  I’m voting for the airlines on this one.  I’ve been on plenty of planes with crying children, everyone has.  Just because he’s crying doesn’t mean he doesn’t have to be strapped into a seat.  You wouldn’t let him get out of a car seat when you were driving just because he was crying, would you?

Travelling these days is never usually a direct flight.  Albeit a hassle with the various airport stops which include landing and take-offs, and it can lend itself to a long day and journey.  However my latest journey from the west coast which first usually includes a boat because I live on an island, and then off to an international airport to start the trip.  Usually a flitter of butterflies arrive in my gut prior to,  with the long waits in line and then the  whole security procedures of stripping and then being scanned.   Seeing a  Randomizer at security for the first time at Miami Dade was new, which randomly routes passengers to security lines.  Love the name RANDOMIZER. http://www.usatoday.com/story/todayinthesky/2013/07/11/tsa-eyes-electronic-randomizers-to-sort-security-lines/2508349/

With the long journey behind me to Nicaragua I felt very relieved and grateful to have made the journey safe and sound.  So as a Plane crash survivor I feel more and more comfortable flying every time I do.  These planes are an incredible way of transportation and it is a cathartic experience for me as I continue to travel.

Collaborating this book Bracing For Impact and sharing some peoples story of surviving a plane crash has been very cathartic indeed.

Too Much Information can either be a good thing or a bad thing.  Our goal here is to keep on top of all plane like incidents and share them in Our News.  Our book was also about sharing our own personal story, as well as sharing within our special group Plane Crash Survival.   The updates makes a survivor like myself question whether I really want to read about crashes.  It is part of our process of sharing stories and real life events that effect us all every day.  The planes in the skies.  A key part of transportation and life in the 21st century.  I get anxious when I know I am going on a trip in a plane.  However  I do have to remind myself that there are planes flying all over the world everyday every minute in the skies.  They are safe, ………people do survive accidents and they happen.    It’s life and about Embracing Life.  Survivor or not.  I feel lucky every day knowing I was one of those people  who survived and can look into the skies everyday and be grateful.  EMBRACING LIFE!

This year seems to be filled with a rapid succession of plane crashes, one right after the other.
And then there is this Icelandic airline that was struck by lighting so hard, it opened a hole in the nose of the plane…that no one even realized was there until after they landed!  How does that happen?
We are so grateful that this didn’t turn into yet one more deadly aviation disaster, but it really makes you wonder what the heck is going on. 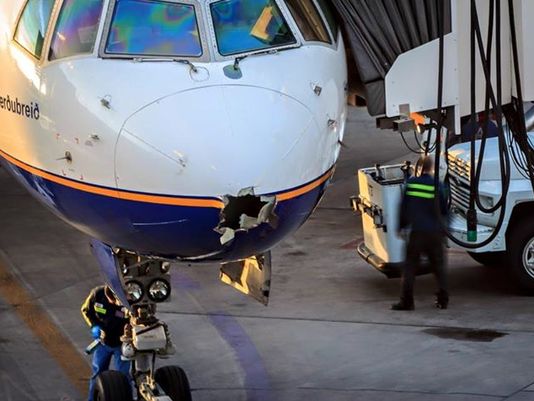 Lindy and I were planning to launch this website in September/October 2015, right around the time that our book Bracing for Impact: True Tales of Air Disasters and the People Who Survived Them is due to be released.
But after the Harrison Ford and Germanwings crashes, we felt like we should launch it sooner rather than later.
We are both plane crash survivors and, unfortunately, have an inkling of what those poor souls felt in the last moments of their lives just before their plane slammed into the side of a mountain in the French Alps.  We survived small plane crashes, and interviewed others for our book who lived through commercial airline crashes…and it is as terrifying as you think it might be.
Our hearts go out to those who were lost in the Germanwings disaster, as well as to the families and friends who were left behind and to the first responders who did their best to make sense of this tragedy.

Putting the final tweaks on our website in anticipation of the publication of Bracing for Impact: True Tales of Air Disasters and the People Who Survived Them.